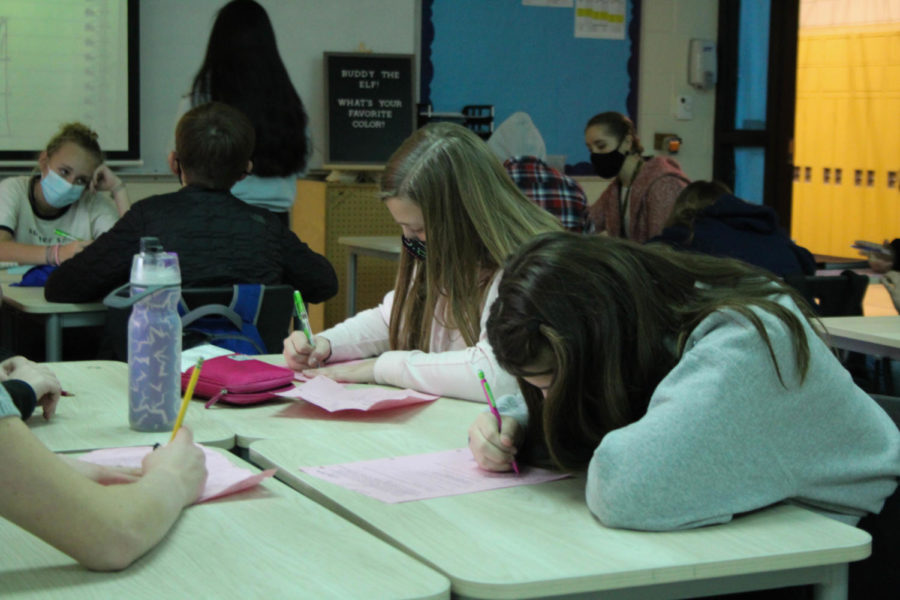 The Preliminary Scholastic Aptitude Test (also known as the PSAT) is a test that is required for students in grades 8th-10th. This test prepares students for the SAT, a test generally taken in 11th grade. It is a timed test and the test as a whole lasts 2 hours and 45 minutes. Originally, East Middle School 8th graders were preparing to take the test on April 13th, however, online learning prevented students from doing so. Currently, it has been rescheduled for this coming Tuesday, April 27th, and many teachers are conducting in-class practices to prepare.

The PSAT consists of two segments: evidence-based reading and writing as well as math. There are two parts to each component and are all mostly multiple-choice questions with an exception for a couple grid-in questions. Additionally, students are only credited for correct answers and aren’t penalized for ones they answer incorrectly. The maximum score a student can earn is 1520. Any score above 950 puts any student above the average score.

Eighth-grader, Keira Wesley, doesn’t think that the PSATs are beneficial to eighth-graders here at East. “I don’t think it’s necessary for eighth-grade because we’ll be taking the PSAT again in 9th and 10th grade,” Wesley says, “and you can even take it as a senior if you want to retake the SAT.” She believes that it isn’t advantageous because students will be taking the test throughout high school. Taking the PSAT in eighth-grade can create unnecessary stress for students and is “too much preparation for a test that will happen 4 years from now,” according to Wesley.

However, others have different perspectives on the PSAT. Annie Goldkuhle thinks that the PSAT is a beneficial non-pressure way to prepare students for the actual SAT. “I think it’s beneficial because you’re not getting a grade for it but it will still help you when you take the actual SATs,” Goldkuhle states. Although she thinks that it will be helpful at the end of the day, however, she’d “Prefer it not to be when we have M-STEP, NWEA, and the algebra 1 credit test.”

There’s a very wide range of opinions on the upcoming PSAT. Although there are many negative perspectives on this, it’s here to stay and hopefully benefit students at East.