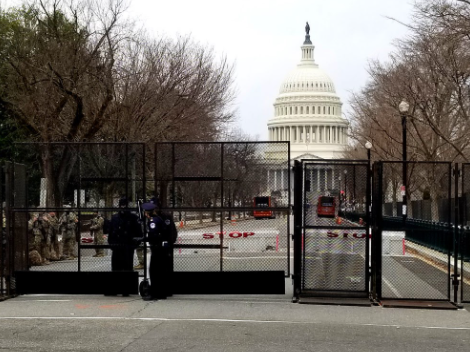 On January 6th, many questioned the security of the U.S. Capitol as numerous Trump supporters decided to protest. The reason was unjustifiable to some people, as they marched in attempting to “stop confirmation of President-elect Joe Biden’s victory.” Protestors pushed past police forces, climbed walls, smashed windows, and more just to get in the U.S. Capitol.

Once they entered the building, people stole things, broke things, and guns were pulled out. By 3:34 pm, A woman was reported to be shot in the neck while in the Capitol and was in critical condition. Around 6 pm that same day, the woman was pronounced dead. This was one out of the five deaths that was caused by the break-in.

The majority of the people that worked inside the Capitol were escorted out as more Trump supporters invaded the building. Some of them were even given protective face shields/masks. As the situation got worse, more and more law enforcement came. The protesters had things like pepper spray, tear gas, and other harmful products that they were using against the police.

As this event happened almost two weeks ago, many are now concerned about the Inauguration Day, which is tomorrow. This Inauguration Day, Joe Biden will step into office as the 46th president, with Kamala Harris as his vice president. “To all of those who have asked,” Trump tweeted before getting banned from Twitter,  “I will not be going to the Inauguration on January 20th.” However, the president not attending this event isn’t people’s biggest concern. Many people are anxious about the safety of the citizens in and around the Capitol when Biden is inaugurated. U.S. defense officials state that they are concerned about an insider attack. The officials are preparing for the fact that there is a possibility of violent protesting.

Because of these events, many people are on high alert for the risk of violence as we near Inauguration Day. Officials are more prepared than earlier this month for instances that may occur in the U.S. Capitol tomorrow.