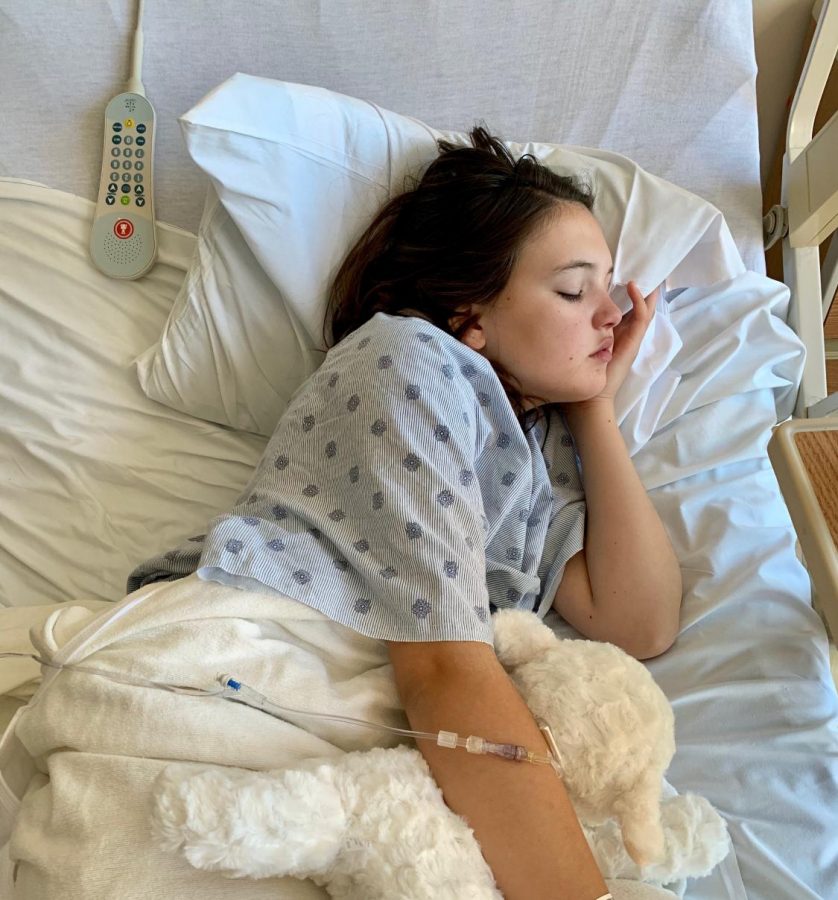 I remember that day like it was just yesterday, because it basically was. On April 23, 2019, I woke up to a stomach cramp. No big deal, I thought. Then it became a very big deal.

I got off the bus at 2:58 pm, hunched over and limping. I barely made it to my moms car on the other side of the street. I knew this was not just a stomach ache. It was something much more severe.

My mom  immediately rushed me to the hospital where I was taken care of in a matter of seconds. The nurses took me to a room that was freezing cold and filled with fear.  They hooked me up to so many things — an IV and lots of tubes. The doctors ran tests to see what was going on with me and asked me so many questions that I couldn’t help but start bawling through the process.

I was embarrassed, and I needed comfort.

After running a few tests to understand why my abdomen was in so much pain, the nurse announced to my mom and I that I needed an ultrasound to get a closer look.

They rolled me to a different room for the ultrasound. All I remember is this blue gel that was thick, slimey, and freezing cold. They moved a wand around to take pictures and videos of the inside of my stomach. It took about 30 minutes to get the results.

It was the longest 30 minutes of my life. Waiting and waiting, with nothing to do but cry.”

Finally, a doctor came in and told us I had appendicitis, and I would need an emergency appendectomy as soon as possible.

My mind went blank and I felt like leaving the room. I was confused, sad, and strangely depressed.

There was a lot of laying around and waiting, just like anytime you are at the hospital. I checked the time and I it was only 5 p.m. I couldn’t believe it. It felt like I had been there for a whole day, but I had just gotten off the bus a couple of hours ago.

At 11 p.m., they finally rolled me to pre-op. All I remember is the nurses telling me it would be okay and that I was in good hands. I wanted to believe them, but it was hard.

Sadly, the time came where I had to say goodbye to my mom. It was time to go into the surgical room. I told her I wanted her to get me Tropical Smoothie when I came out but of course I could not even eat anything that night. She clenched my hand tight and wished me luck and said that she would be there when I was done.

I slowly started feeling like I was going to pass out. Then all of a sudden–

I opened my eyes.

The surgery was over.

I was in a new room with a big bed, new warm sheets right out of the dryer, a warm pillow, a nurse that waited on me hand and foot, and a shiny white card on the window. It was just after midnight, and II felt like going to sleep. All of a sudden, I looked down and their they were 3 medium size scars across my stomach.

It was crazy and I was extremely curious.

We were flooded with Facebook and text messages from everyone we know asking if we wanted and needed anything. We didn’t need anything, I just wanted to see my best friend Camryn.

I tried falling asleep for about twenty minutes and I could barely hold my eyes open but, I was so uncomfortable. Whenever I even moved the IV hurt even more. A beep noise went off to alert the nurses that I was moving.

Early that morning,  the nurses were waking me up hour by hour giving me this bright green medicine that tastes like nail polish remover and made me want to get sick every time I smelt it, let alone drink it.

After lots of tries, I slowly but surely made it through the night with no concerns or pain in my stomach.

I was well again.

The morning went by quickly, and I really had nothing to do. I knew that Camryn was supposed to be coming around 11 a.m.. I was so excited she was coming because I could not wait to talk to her since I had not seen her in awhile.

Finally, I heard a knock at the door and it was her and her mom. Of course, she showed how well she knows me by bringing my favorite Tropical Smoothie. It totally made me day.

More people came to visit me, and brought me ice cream after ice cream. I was so grateful that all of those people cared about me and took time out of their day to come and visit me.

Soon, it was time to go home. My mom packed up  the few things that we had with us and finally left the hospital.

They brought a wheelchair up to my room and wheeled me down to my mom’s car. The nurse put me in the car and we were back to my house in a matter of five minutes.

I still can’t believe that was real, There was some good that came out of this, seeing Camryn, getting unlimited ice cream, and meeting new people. I just wish it happened under a totally different circumstance.